Dived Up Publications are independent publishers of books for scuba divers, freedivers and snorkellers. Our mission is to go beyond the basics to produce specialist books fit for underwater explorers: serious (and not-so-serious), properly researched and well-designed. We have published books on underwater photography, diving equipment, freediving, location guides and log books.

As we don’t have the huge overheads of large publishers we can consider publishing niche titles which would not otherwise make it into print. We then bring together our diving and publishing know-how to create exciting and beautiful books for divers which make it into both the regular book trade and dive shop markets, and are released as eBooks.

If you have an idea for a book, or have already written something and are trying to get it published we will consider your proposal. On our Submissions page we’ve created a form which makes it easy for authors to send us the details we need to begin with. 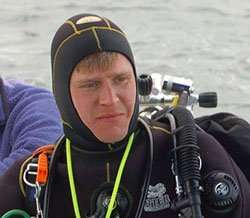 Alex Gibson is a UK-based diving instructor who has trained with PADI and BSAC (The British Sub-Aqua Club). He enjoys diving wherever and whenever he manages to get away with it. He has dived around the world including in Europe, the Red Sea, Caribbean, Thailand, Indonesia, Australia and New Zealand. He is especially passionate about the quality and variety of UK diving and regularly dives off the south coast of England.

As a member of Oxford BSAC he was a key part of the team which produced the winning entry for the 2013 Heinke Trophy. He is a keen underwater photographer, although so far not up to the very high standards of Dived Up authors! Despite that, he keeps trying and is a member of the British Society of Underwater Photographers.

He has a background in media work having literally grown up in a publishing house and worked in broadcast television before returning to books. He set up Dived Up in 2012 in order to put his passion for diving and the underwater world into print and digital form. He is a member of the Independent Publishers Guild.