The Ultimate Guide to a World War II Shipwreck

Diving the Thistlegorm is a unique in-depth look at one of the world’s best-loved shipwrecks, the World War II British Merchant Navy steamship, featuring award-winning underwater photography. In this highly visual guide, cutting edge photographic methods enable views of the famous wreck and its fascinating cargo which were previously impossible. Sitting upright in 30m of clear, inviting Red Sea waters, the ship is packed with the materials of war. Largely complete lorries, trucks, motorbikes, aircraft spares and airfield equipment are crammed into the forward holds and the remains of other vehicles lie amongst boxes of ammunition in the exploded aft holds. Often referred to as an underwater museum, the wreck fascinates visitors for dive after dive.

The book is the culmination of decades of experience, archaeological and photographic expertise, many hours underwater, months of computer processing time, and days spent researching and verifying the history of the ship and its cargo. For the first time, Diving the Thistlegorm brings the rich and complex contents of the wreck together, identifying individual items and illustrating where they can be found. As the expert team behind the underwater photography, reconstructions and explanations take you through the wreck in incredible detail, you will discover not only what has been learned but also what mysteries are still to be solved.

‘This book lives up to its title, thanks largely to a multi-faceted survey by a team of Egyptian and British archaeologists… It goes further than any previous guidebook in detailing the current condition of the wreck and its incredible cargo of wartime artefacts, from rifles to railway engines… There’s so much to admire here – the complementary use of traditional photography alongside the large scale models and orthophotos afford the reader a way of looking at a wreck that could barely be imagined a decade ago… I recommend this superb book to anyone with an interest in the subject.’– SCUBA magazine (Jan 2021 issue).

‘A brilliant in depth guide to the wreck and all it’s facets, all illustrated by superb photos and graphics.’–Scubaverse.com

‘Other books have been written about the Thistlegorm, but as befits the wreck this one is probably the most visually arresting ever to go to print… a remarkable achievement, and clearly a labour of love by a group of professionals smitten by this wreck… stunning colour image after stunning colour image leaps out from every page’— BritishDiver.co.uk

‘A detailed, thorough book with excellent images, both stills and 3D photogrammetry. It is a really good read.’–Divelog Australia.

‘The most comprehensive guide to one of the world’s greatest shipwrecks’— Emad Khalil, Alexandria University (from the Foreword)

About the authors of Diving the Thistlegorm

Simon Brown is a photogrammetry/3D reconstruction expert who has documented underwater subjects for a wide range of clients including Historic England and television companies such as National Geographic Channel and Discovery Canada. He is currently teaching police forensic collision investigators the use of photogrammetry for evidence preservation. He was named RPS Science Photographer of the Year 2020 for his photogrammetry image of the complete wreck which features in the book. Jon Henderson is Reader in Archaeology at the University of Edinburgh where he is the Director of the Underwater Archaeology Research Centre. With specific research interests in submerged prehistoric settlements and developing underwater survey techniques, he has directed underwater projects in the UK, Poland, Greece, Italy, Egypt, Jamaica and Malaysia. Alex Mustard is a former marine biologist and award-winning underwater photographer. In 2018 he was made an MBE in the Queen’s Birthday Honours list for “Services to underwater photography”. Mike Postons pioneered the use of digital 3D modelling to visualise shipwrecks, as well as the processes of reconstructing original ships from historic plans. He has worked with a number of organisations including the National Oceanic and Atmospheric Administration, Historic England and the Nautical Archaeological Society.

Be the first to review “Diving the Thistlegorm” Cancel reply 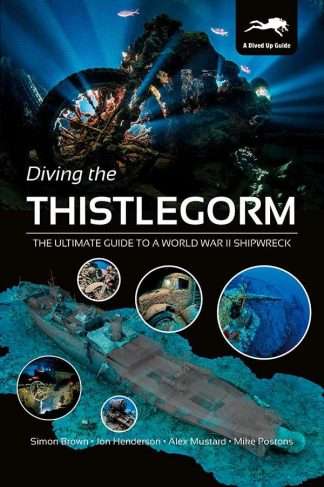