Free Delivery in the UK

The Diver’s Tale is an unvarnished account of UK diving, based on Nick Lyon’s 40+ year experience.

Great Britain is an island nation so, unsurprisingly, scuba diving is a popular pastime enjoyed by thousands of keen participants and just as many of the armchair variety. A carefully-structured programme of training ensures that UK divers are well-prepared for the challenging conditions which may be encountered beneath our seas. Or does it?

How many trainee divers were taught about the perils of ‘high-speed testicular trauma during descent’? Or the dangers of ‘having sex in a tent with a deaf person’? Why bacon ‘should be in your first aid kit’? How to build a space shuttle using salvaged ammunition? Or why the name Valerie is so very special?

During his decades-long odyssey through the strange and exotic world of British diving, Nick Lyon and his disparate collection of buddies have answered all these questions from personal experience, and many more besides. It may not be pretty, it may not be painless, but it is real British diving.

This Second Edition has been completely re-edited, brought up to date, contains a brand new chapter and a new Foreword by underwater adventurer Andy Torbet.

‘[The Diver’s Tale] offers an insightful view of British scuba-diving. More importantly, it’s that rare thing in diving – a very funny book. I’d go so far as to say it’s the most amusing book about the sub-aqua scene I’ve read since the heyday of Andy Blackford, and I know that because I kept laughing out loud as I turned the pages… And before you get the impression that The Diver’s Tale is just a succession of gags, this book also has, like all the best comic works, a more serious side. I’ll let you find out about that when, as I’m sure you will, you get to read it… If you haven’t already, treat yourself.’— Steve Weinmann, Diver magazine (click for full review).

‘Over the years I have read a lot of diving-related books. And I mean a lot. I have to say, The Diver’s Tale is definitely up in the top ten. Why, you may ask, what makes it such a stellar read? Well, that is down to Mr Lyon and his writing style. He manages to write in a very accessible fashion about a wide variety of incidents, issues, situations and more that we, as divers – particularly UK divers – can all identify with and, in many circumstances, sagely nod to ourselves and think “yep, I’ve done that”, or “hmmm, I’ve been there”. It is this innate ability to zero in on all of the foibles that make the British diving scene so unlike anything else on the planet that makes The Diver’s Tale such an enjoyable read. Even more impressive is the fact that Nick also manages to include some genuinely insightful and useful observations in among the disparate tales of diving derring-do for readers to be able to tuck away into their mindset which will aid them in their future diving endeavours, and he doesn’t shy away from stories with sadly tragic outcomes.’— Mark Evans, Scuba Diver magazine.

‘A brilliant book… The Diver’s Tale cuts to the essence of diving, the rough and the smooth, the charm, the adventure, the romance, the pitfalls and the tragedies. It looks at the hard truths, the sheer fun and a few of the scary bits too.’— Scubaverse.com (click for full review)

‘A bit like building a rebreather out of old washing machine parts… it should be a mess but somehow it works…  It’s a brilliantly British book, full of heart and humour, and well worth reading’— BritishDiver.co.uk (click for full review)

‘When it comes to celebrating the depressive/compulsive nature of the British diving condition, there is no writer like the talented Mr Lyon… I cannot recommend it highly enough’— SCUBA.

Acclaim for The Diver’s Tale

‘I found it utterly absorbing and so did my budgie, Cyril, as it fitted perfectly in the bottom of his cage’— Alex ‘Woz’ Warzynski, Chairman of BSAC.

‘A breath-taking triumph that must take its place at the very pinnacle of diving literature, above Cousteau and all them lot. Now will you delete the photos?’— Helen Hadley, Co-owner Orkney and Shetland Charters.

About the author of The Diver’s Tale

Nick Lyon was born in Plymouth to seafaring parents and has been obsessed with the underwater world since childhood. After unsuccessfully pioneering the use of cardboard diving equipment in the bath, he went on to learn to dive properly in 1982 and, to his great surprise, eventually became qualified as an instructor trainer with the British Sub-Aqua Club (BSAC). He has worked as the Southwest Regional Coach for the BSAC and has twice won the Alan Broadhurst Award for displaying the highest standards of diving conduct whilst performing an underwater rescue. He spent 28 years working as an operating theatre practitioner before leaving the NHS to write and dive full-time. He has written over 100 articles for SCUBA magazine, including a monthly column. This is his first book. He is married to Julie, a teacher and diver and has two children from his first marriage. His other interests include cooking, polar exploration and trying to play Iron Maiden songs on the bass guitar. He has a small flatulent dog called Skipper.

* The first edition of this title was published in 2012 by Hallmark Press International Ltd.

Be the first to review “The Diver’s Tale” Cancel reply 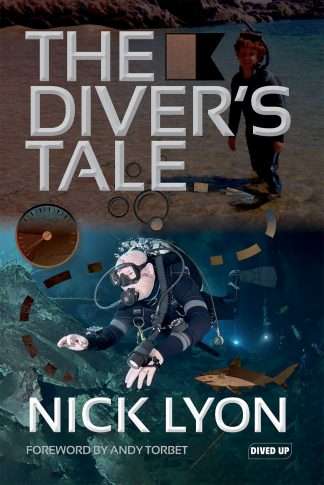