Solving the Mystery of the Darlwyne

With a Foreword by Miranda Krestovnikoff.

Free Delivery in the UK

The Forgotten Shipwreck is the tragic true story of a Cornish pleasure boat which sank without trace or sensation, relegated in news columns by England’s football World Cup triumph the day before. It spans so many facets, from a village numbed with whole families wiped out, to angry exchanges in the House of Commons and law courts. There is intrigue, chicanery, deceit, incompetence and greed. It had far-reaching ramifications and yet, for all that, the Darlwyne tragedy lacked an ending.

On Thursday 4 August 1966 the sea began to give up its dead. The relatives of twelve of the thirty-one people who had set out on a pleasure trip on 31 July could at least temper their grief to some small extent with the fact that their remains had been found. The loved ones of the other nineteen would have no such solace.

Some fifty years later a team of divers, archaeologists, filmmakers, photographers and wreck researchers set about to change that. By piecing together eyewitness accounts, news stories, court proceedings, weather reports and archive material, by applying modern methods and underwater search techniques would they be able to succeed where the original search mission had been unable? Could they unravel the mystery of complicated waters and pinpoint the final resting place of the Darlwyne?

‘As with all Nick’s books, this is well written and extremely well researched. Nick tells a good story with realism and when appropriate, a touch of humour… Nick takes us on a fascinating journey to find the lost wreck and try, finally, to give the surviving family and friends some closure’– Scubaverse.

‘Nick is a master of both comedy and tragedy… this was to be the latter’— Miranda Krestovnikoff (from the Foreword).

Ebook versions of The Forgotten Shipwreck

The Forgotten Shipwreck is also available as an ebook, including from the following places:

The author of The Forgotten Shipwreck

Nick Lyon was born in Plymouth to seafaring parents and has been obsessed with the underwater world since childhood. He is an instructor trainer with the British Sub-Aqua Club (BSAC) and has worked as the Southwest Regional Coach for the organisation. Nick is a twice-times winner of the Alan Broadhurst Award for displaying the highest standards of diving conduct whilst performing an underwater rescue. He spent 28 years working as an operating theatre practitioner before leaving the NHS to write and dive full-time. He has written over 100 articles for SCUBA magazine, including a monthly column. This is his second book (after The Diver’s Tale, 2nd Edn., 2019, Dived Up).

Miranda Krestovnikoff is a TV presenter, author and diver. She has presented television and radio stories around the world, on environmental issues, travel and wreck diving, amongst other things. She is also President of the Royal Society for the Protection of Birds (RSPB), patron of Alderney Wildlife Trust, patron of Whale and Dolphin Conservation (WDC), honorary life patron of the Shark Conservation Society, Sea Champion of the Marine Conservation Society and one of the first Friends of the Canal & River Trust.

Be the first to review “The Forgotten Shipwreck” Cancel reply 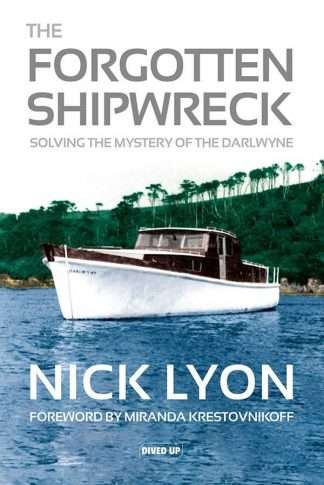